I am thrilled to share with you the first of my Monthly Newsletters. Every month, you will be receiving an email blast from me with news, legislative updates, announcements, and important information about Senate District 4, Albany, and New York State.

As we begin to emerge from the COVID-19 pandemic, New Yorkers must continue to band together and help one another. As you are probably aware, our senate office holds a very significant number of community outreach events each year. This year has been, and will continue to be, no exception, as we seek to assist those having difficult times during the pandemic. 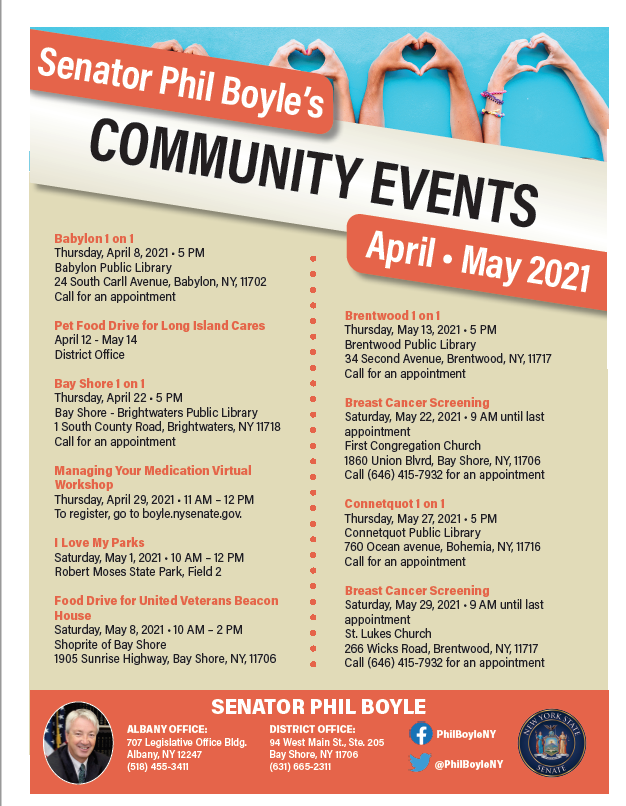 On January 7th, I was invited to be a guest on “Tucker Carlson Tonight,” where I discussed our state’s disastrous rollout of the Covid-19 vaccines.

Frustrations continue to grow over vaccine rollout in NYS

On January 14th, “Governor Cuomo’s vaccine rollout can only be described as utter chaos. Millions of New Yorkers have no idea when or where they can receive their life-saving shots, and they feel totally abandoned by their state government.”

On January 28th, I  was joined by Babylon village Mayor Mary Adams, Suffolk County Legislator Kevin McCaffrey and Steve Flotteron, as well as many local restaurant and tavern owners as we called on Governor Cuomo to push back the in-person dining curfew.

We are demanding full transparency and the disclosure of the true number of those who died after contracting COVID-19 in our nursing homes and adult facilities.  We also demand the release of all communications – both written and verbal – between Governor Cuomo’s office and the Department of Health, regarding keeping these figures secret.
January 29th, 2021; Source: NYSENATE

For Black History Month in February, I hosted my annual Black History Month Celebration Awards Ceremony. I am so pleased we had an opportunity to safely celebrate the incredible accomplishments of William and Renita Certain, the Honorable Alonzo Jacobs, Viscel Moore, Marie Saint-Cyr, and Johanna Wilson-Fields. We also honored Suffolk County Sheriff’s Office, Sgt Keith Allison, posthumously. These seven individuals are the very embodiment of perseverance and dedication.

On February 3rd, I partnered with Sayville Community Ambulance Company and the Sayville Public Library to host an online Narcan Training. The loneliness and isolation brought on by the Covid-19 Pandemic has meant that many of the gains we made in reducing heroin and opioid abuse have been lost. The number of overdoses in our area are again on the rise. Programming like this greatly contributes to addressing this critical issue.

On February 5th, Members of the New York State Senate rallied with the New York Blood Center at their office in Bohemia this morning to encourage the public’s help to boost Long Island’s blood supplies.

On February 18th, I partnered with the American Red Cross on Long Island to host an emergency preparedness education program for children called, The Pillowcase Project. The Pillowcase Project is a preparedness education program for young students that teaches about the importance of personal and family preparedness, as well as safety and coping skills.The framework of the program provides students with the tools they need to respond to emergencies in a safe and reasonable manner.

On February 22nd, I spoke with News12 about the incident at Jones beach with the ineffective vaccines.

“The Governor’s administration should have told the public about the ineffective vaccines and what happened. Don’t be secretive about it, commissioner and governor. Tell us what happened. Be honest about it, be upfront.” -Senator Phil Boyle
February 22nd, 2021; Source: News 12 Bronx

On February 24th, I offered an amendment on the state senate floor to take away the emergency powers granted to Governor Andrew Cuomo at the beginning of the Covid-19 Pandemic. In light of recent reports that the Cuomo Administration deliberately withheld critical data on nursing home deaths, I introduced the amendment to restore the Legislature to its rightful place as a co-equal branch of our state government.

CSEA, bipartisan group of legislators from Long Island, push back on proposed state mental health cutsCSEA, the union representing state workers at Sagamore Children’s Psychiatric Center and Pilgrim State Psychiatric Center, is working with a bipartisan group of state legislators on Long island to push back against a proposal that will devastate Office of Mental Health services in the region.

On March 5th, I spoke with News12 about voting down a bill to strip Governor Cuomo of his emergency powers.
“The bill actually doesn’t go far enough. We want to review each of the governor’s 96 directives that he’s issued over the last year one by one. I agree with some of them, but others are completely nonsensical. Why can you be in a restaurant at 9:59 p.m. but not at 10:01 p.m.? Why can kids wrestle in school but not play instruments in the band unless they’re 12 feet apart? Republicans have offered an amendment 19 times to revoke the Governor’s powers and we were shot down by Democrats every time.”
-Senator Boyle
March 5th, 2021; Source: News 12 Bronx

I would like to express how appreciative I am to the hundreds of students who took part in my weekly “Read with Senator Boyle” initiative. It was a pleasure to read some classic favorites and virtually engage with classrooms throughout my District. I would like to encourage students to continue their literary education. Every month, not just March, should be a celebration of reading. As author Stephen King famously said, “Books are a uniquely portable magic.”